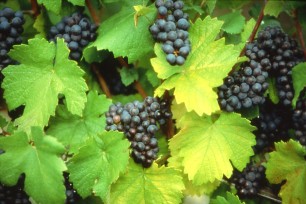 The Champagne Louis Roederer terroir is located in a particular climatic area in Champagne influenced by both oceanic and continental weather; while this can make the winegrower’s job one of the most difficult on earth, the climate can also produce ‘minor’ miracles. Each vintage in the Champagne region is different; and in recent years we have witnessed sharply contrasting climatic conditions:

2012: a humid and cold spring—making it extremely difficult to manage vineyards cultivated according to biodynamic principles—followed by a splendid hot summer.

The Vines and the Climatic Conditions of 2014: Three-step weather

After a mild and very humid winter, 2014 proved no exception with starkly contrasting weather patterns.

The first weather phase: the spring was dry and sunny, without significant frosts, with slightly warmer temperatures than normal, resulting in early budding, about seven to eight days ahead of the usual dates (2nd April for the Chardonnays, 5th for the Pinots Noirs, and 8th for the Meuniers).

May was marked by a colder period, and slowed down the vines’ development by delaying the mineralisation of the soils and consequently the vine plants’ growth.

A very hot June brought the finishing touch to the perfect, rapid, and homogeneous flowering (8th June for the Chardonnays, 10th for the Pinots Noirs, and 11th for the Meuniers). At the end of June, the harvest was forecast for the first days of September.

The second weather phase: the cool, rainy summer was truly oceanic—the coldest and most humid in twenty years. The arrival of the rain and the cool temperatures completely overturned all the forecasts. The vines benefitted from the water, and the soil (finally) began to be mineralised, but the change was too brusque and there was an increasing risk of over-vigorous growth. A decision was made to change the viticultural process and switch from continental viticulture to an oceanic one: no more working the soil, the grass was left to grow, capturing excess water in the soil; the vines thinned and regularly clipped back, and pruned again … in short, nature needed to be restrained to avoid imbalance and prevent diseases from attacking the leaves and the grapes.

The third weather phase: Continental, dry, and warm … September was a viticulturist’s dream come true. The continental influence began at the end of August with a north to north-east wind, bringing cool nights followed by warm, sunny days. This weather pattern was particularly helpful for maturing the grapes, which were bathed in warmth and light. However, the most noteworthy result was the concentration in the grapes which was reminiscent of the final phase of the 2002 vintage: thanks to the sunshine, wind, and temperature variations, the berries lost water content through evaporation, resulting in a concentration of sugars, acids, and flavours.

The 2014 harvests: Saved by calcareous soils and biodynamics

The harvests were approaching in exceptional climatic conditions. There were however,—and this is generally true of years with marked climatic contrasts— different levels of ripeness in terms of the sugar content, the acids and aromas: while the grapes had a good sugar content, there was also high acidity and a vegetal taste. The team wanted to aim for optimal maturity on all grape varieties in order to attenuate the acidity and enable the flavours to develop. The cool and rainy summer deprived the grapes of their flavour; so September would have to be the month for developing maturity, and time was required to achieve this.

As a precaution against an early harvest, the number of harvesters was increased, swelling the team to 800, all ready to harvest in 8–9 days per sector (instead of the usual 10–12 days). This anticipatory initiative turned out to be a winning tactic: this ‘strike force’ allowed the team to wait as long as possible and harvest the grapes once they were fully ripe.

The harvest began at Cumières on 11th September, on 12th in Avize and at Verzenay and on 13th in Aÿ, all ending on 21st September – a beautiful sunny day.

One of the keys to the year’s success lay in changing the harvest process and finishing each sector with the vines on calcareous soil and those cultivated according to biodynamic principles. The calcareous soils improve drainage and slow the vines’ growth, producing fine, healthy vines with balanced maturity. The biodynamic process, which involves a specific cultivation of the vineyard, produced a balance that was even more favourable to optimal maturity—and the result has been quite exceptional.

At time of writing, it is far too early to be able to assess the true quality of the 2014 vintage, but we can rest assured that it will be numbered amongst the good ones.

That said, we do know that the climatic conditions have been critical to the vintage; with unevenly distribution of rain in summer, the Pinots noirs at Aÿ received twice the rainfall of Verzenay, and consequently the harvest at Verzenay took place at practically the same time as at Aÿ. Consequently, it would seem the Montagne de Reims crus should enable us to produce highly successful Pinots Noirs.

The hilly terrain and the soils have also been key in coping with the extra water: the chalk soils in the lower central area of the slopes, which provide the greatest drainage, absorbed the excess water. This drainage also helped the Côte des Blancs Chardonnay terroirs as well as the Pinots Noirs on the chalky soils of the Cristal estate.

Lastly, the viticultural processes, particularly biodynamics, enabled the team to optimize the balance of maturity. The combination of all these conditions will undoubtedly produce the most flavoursome and dense wines.

All that remains is to vinify all the juices by adapting—as with every year—the house’s ‘à la carte’ practices. As with the vines, the observation of the wine will enable the team to work optimally to sublimate this wonderful gift from Nature.