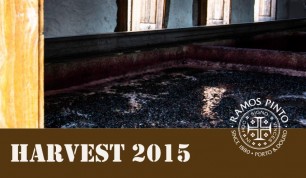 Ramos Pinto have reported excellent conditions for the 2015 Harvest, with very positive results in terms of quality and quantity.

Leaves on the vine remained very green at the end of July. The soil managed to retain a lot of water, despite a drought caused by low rainfall throughout the year. Although new vines suffered during maturation, well-established vines produced firm, aromatic and balanced grapes.

The harvest began on the 10th August (a week later than 2014) with the Viosinho grape planted in Ervamoira. Cool temperatures recorded during that week slowed maturation of the rest of the white grape varieties, especially Rabigato.

The reds began to be harvested on the 24th August (5 days later than the previous year) and had a high alcohol content, particularly for Touriga Nacional.

Harvest took place in the first two weeks of September in sunny, stable weather conditions. In general the grapes were well balanced and expressive.

The start of the harvest at Quinta dos Bons Ares was brought forward a week, and the white grape harvest began on the 25th August. Red grapes were harvested from the 3rd September and ended on the 29th. Rainfall on the 15th September was a blessing which allowed the Touriga Nacional and Touriga Francesca to reach full maturation.

Grapes were in perfect health from Quinta do Bom Retiro, thanks to well-timed rainfall and ideal maturation conditions.

The White Port has been very successful, fresh and fruity.

The Red Ports of special categories were vinified in lagares and have revealed exceptional quality, concentration, beautiful colours and great aromatic expression. The Touriga Nacional from Ervamoira and Bom Retiro, and Touriga Francesca from Ervamoira, have played the leading roles.

All in all this has been a very promising year!

For the Reds we can foresee an interesting level of quality with concentrated, fruity wines with mature tannins.

Contact Christine to find out more about the 2015 harvest at Ramos Pinto.