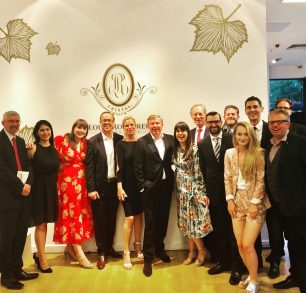 The 2008 vintage champagne has been lauded by critics, but perhaps none more so than Cristal, a wine described by Jean-Baptiste as “deep, intense and masterful” that has received no less than 3 perfect scores of 100 points.  The wine’s “almost saline concentration has not been created by the sun, but is derived from the dryness of the chalk soil in a particularly cool summer”. This coiled, mineral driven intensity is a hallmark of Cristal, a wine renowned for its ethereal and complex reflection of terroir.

Frédéric Rouzaud commented “We are delighted to have previewed Cristal 2008 last night in London. The release of a Cristal vintage is always a memorable moment and none more so than the exceptional 2008, the qualities of which have been beautifully articulated by Chef de Cave, Jean-Baptiste Lécaillon and his team at Louis Roederer. The release of the 2008 also comes at an exciting, vibrant and dynamic period for the maison and its prestige cuvée, with the Cristal Vinothèque series making its debut last Autumn and a very limited re-release of Cristal 2002 to be looked forward to later this year.”

Cristal 2008 will be available exclusively at Harrods from 19th June for a limited period before general release.

Created in 1876 at the behest of Tsar Alexander II, Cristal was the world’s first Cuvée de Prestige. Crafted from Grands Crus from the Montagne de Reims, the Vallée de la Marne and the Côte des Blancs, and the result of a unique savoir-faire and devotion, this rare champagne is the jewel in the Louis Roederer crown.

Symbolic of the perpetual quest for excellence that defines Roederer today under the stewardship of seventh generation owner Frédéric Rouzaud.  Cristal is radically different to any other champagne on the market.

At Louis Roederer, the appearance of new vintages gently marks the life of the Champagne House but does not transform it. However, the unveiling of Cristal 2008 last night at in London opens a new chapter in the fascinating life of this flagship cuvée.

2008: A vintage of purity and freshness

Although the vintage alone does not make the wine, it does add its nuances, and the unique character of Cristal 2008 was born from a meeting with its terroir, thanks to the meticulous and dedicated work of Roederer’s wine growers.

The exceptional chalky soils at the origin of this champagne have greatly contributed to the texture and precision of this 2008 which sits among the great vintages for freshness and purity, alongside the 1988 and the 1996.

As the Cristal 2008 showed impressive personality, Jean-Baptiste Lécaillon, Cellar Master, decided to extend its ageing to ten years. This has endowed this vintage with remarkable maturity and contributed to its surprising and exacting temperament.