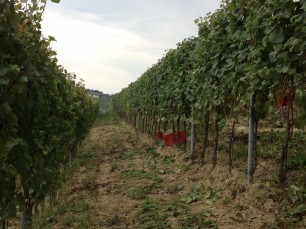 Harvest 2014 gets underway at Pio Cesare starting, as usual with the Chardonnay grapes.

After an unusual growing season, with an uncharacteristically cool summer, harvest at Pio Cesare began at the beginning of September with some sun at the very last minute, saving the day.

Chardonnay grapes from ‘Il Bricco’, harvested from vines up to 34 years old, also go into the blend of the Pio Cesare ‘Piodilei’ along with grapes grown in the Colombaro vineyard (Serralunga).

In total Pio Cesare own 8.5 hectares of Chardonnay vines planted in the Barolo and Barbaresco zones.