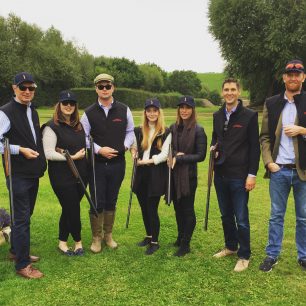 Guests were taken on a morning of tutored clay shooting followed by lunch at The Lodge, provided by Nat.ive restaurant, accompanied by a selection of Domaine Faiveley wines.

Eve’s skill at explaining and tasting wine did not extend to her shooting ability, however, which led her to become the proud winner of the “Clay Conservation” prize, awarded to the person who hit the least number of clays throughout the day!

The overall winner of the shoot, William Hazlerigg, scored an astonishing 39/40, closely followed by Imogen Taylor, who shot 37/40, making her the highest scoring woman on the day.