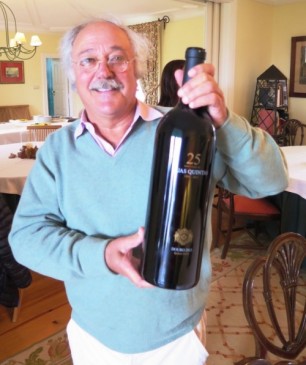 While “Part One”, published last month on The Wine Detective, focussed on the Duas Quintas whites, “Part Two” concentrates on the reds.

Duas Quintas, of the famous Port House Ramos Pinto, was founded by brothers Adriano and Antonio, and is still run today by their heirs, João Nicolau de Almeida and Jorge Rosas.

The eagerly anticipated release of the Duas Quintas maiden red was a “very near miss”.

“Chief Winemaker João Nicolau de Almeida told us he was ‘very happy’ with it at bottling.  However, the very next day, he received word of disaster. Hot-footing it back to the Douro from Oporto he discovered that, “in something like the coldest year in a century,” the wine had frozen, forcing the corks out!

… Fortunately, when he tasted the wine it was good.  In the end, 80,000 bottles were uncorked of which 60,000 were successfully salvaged and released.”

Following an exceptionally successful Vertical Tasting, comparing the vintages from 1990 to 2013, Ahmed concludes:

“As with the whites, this vertical revealed that the best red wine vintages were often made in generally declared Vintage Port years.  The other striking revelation of the tasting was the longevity of the Classico – it offers terrific and complex bang for modest buck”.

Click here to read the rest of the article.

Contact Christine to find out more about the exceptional reds produced by Duas Quintas.