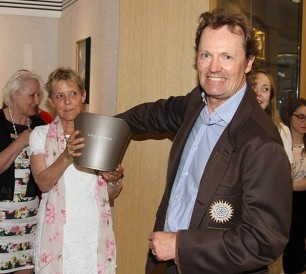 The Draw to decide match play in the opening league phase took place on the 8th June in London in the Jaeger-LeCoultre Flagship Boutique on 13 Old Bond Street, with Champagne Louis Roederer flowing freely.

After the traditional opening speech, the name of each team was drawn out of the Gold Cup trophy and a representative from each team invited to draw which group they will be playing in:

Chris Bethell, Polo Manager for Cowdray Park, comments: “We are delighted that fourteen teams have entered the 2015 Jaeger-LeCoultre Gold Cup, indicating once again the stature of the British Open Polo Championship in world terms. Every team will draw for a place in three leagues. I guarantee every team four league games, and the top eight, determined by points and goal difference, go forward to the quarter finals leading to the final knock-out phase of the British Open tournament.”

An impressive debut was made in the 2014 tournament by the King Power team of Aiyawatt ‘Top’ Srivaddhanaprabha, who reached the Final in his first ever entry of the Gold Cup. His side returns in 2015 as King Power Foxes with Gonzalito and Facundo Pieres, and a second team, King Power, has been entered by Top’s brother Apichet ‘Tal’ Srivaddhanaprabha.

Winners in 2011 and 2013, Lyndon Lea’s Zacara team also makes a welcome return. El Remanso is another team which has featured strongly in the tournament in recent years, reaching the Final in 2012.

The Jaeger-LeCoultre Gold Cup for the British Open Polo Championship opens on Tuesday 23rd June when the Carlos Gracida Memorial Trophy will be contested. Quarter Finals take place over the weekend of 11/12th July, Semi Finals on Wednesday 15th July and the Final on Sunday 19th July.