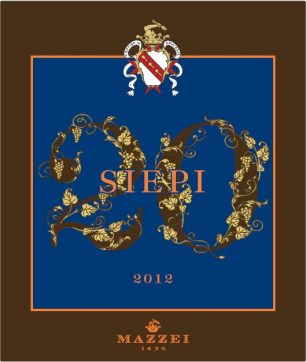 Julia Harding has reviewed the Castello di Fonterutoli Siepi 1992 and 2012 following a special tasting dinner celebrating the 20th anniversary of this iconic Sangiovese and Merlot blend.

A blend of Sangiovese and Merlot. No temperature control at this point in the winery’s history and it was the first vintage of this wine (after an experimental blend in 1989) as well as the first with Carlo Ferrini as consultant. ‘Another fresh vintage’, says owner Filippo Mazzei. 50% new oak. They planted Merlot at a time when most people were planting Cabernet. And 1992 was not great for Sangiovese but it was very good for Merlot. 5,500 bottles produced.
Smells quite similar to the 2005, smoky, undergrowth, elegant and dry but still showing the remains of dark fruit, and a light meaty sweetness. Meaty truffle notes. Silky, very fine grained but present tannins. Deliciously fresh and complex. Later, with air, the meatiness is less evident though there is still a savoury flavour and notes of iron (bloody). Drink 2000-2020

The 20th vintage of this 50/50 Sangiovese/Merlot blend, celebrated by a special anniversary label. 18,000 bottles produced.
Scented, even a hint of lavender, so dry and so fine. Dark fruited and extremely elegant. Real finesse already and a dusty, mineral quality that adds to that effect. Nevertheless there is a juicy freshness. Nothing flashy about this. It gets sweeter-fruited and softer with time in the glass and overall it seems to be marked more by the Sangiovese than by the Merlot. Drink 2016-2028.