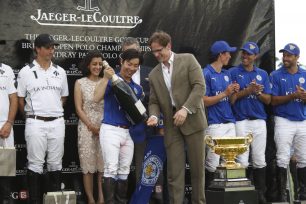 The King Power Foxes deservedly retained their title of British Open Champions in the Final of the Jaeger-LeCoultre Gold Cup on Sunday 17th July, of which Louis Roederer were the official Champagne sponsor.

For the King Power Foxes’ 2016 team, the 2015 winner ‘Top’ Srivaddhanaprabha gave up his place at number 1 to his brother ‘Tal’ Srivaddhanaprabha, the remaining team members forming the same line-up as 2015, with Hugo Lewis, now playing off 2 goals, alongside the 10 goal Pieres brothers, Gonzalito playing at number 3 and Facundo at Back.

Along with their Trophy, the winning team were presented with a Salmanazar of Champagne Louis Roederer Brut Premier by Richard Billett, Managing Director of Maisons Marques et Domaines, to help them celebrate their second successive victory at the Jaeger-LeCoultre Gold Cup.