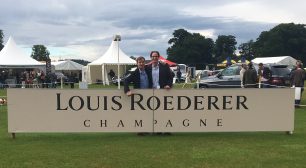 The King Power Foxes scored a well-deserved hat-trick, winning this year’s Final of the Jaeger-LeCoultre Gold Cup on Sunday 23rd July for the third year in a row, with Louis Roederer as the official Champagne partner.

The nail-biting final was played on Sunday afternoon between last year’s champions, King Power Foxes, and the El Remanso team of four British professional players who had captivated the local crowd throughout the tournament. Despite a couple of bouts of torrential rain, nothing could dampen the festive spirit, helped some way by the Cristal 1999 & 1997 en magnum poured at the Louis Roederer table.

It was a particularly pleasing result for King Power Foxes, who have dominated the British Polo scene in recent years, winning the title at the Jaeger-leCoultre Gold Cup for the third time in a row. Taking the place of ‘Top’ Srivaddhanaprabha in the King Power team was 1 goal player Hugo Taylor, with James ‘Jimbo’ Fewster at 2, and the formidable combination of 10 goal Pieres brothers Gonzalito at 3 and Facundo at Back.

El Remanso played their established 2016 side with Charlie Hanbury at the front door, Ollie Cudmore (5 goals) at 2, and 6 goal players James Beim and James Harper at 3 and Back.

Although the British quartet, El Remanso, dominated in the first few chukkas, King Power Foxes took control in the 3rd and went on to achieve a 6-3 lead at half time. Although El Remanso rallied in the 5th, King Power demonstrated outstanding skill and accuracy, going on to win the title of British Open Champions with the score 13-8.

For more information on the event and the partnership, please contact Marinel FitzSimons.