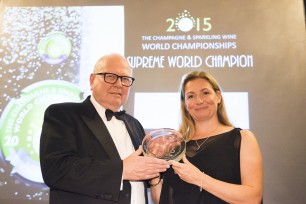 Commenting on the results, Tom Stevenson said: “With 113 new producers, a 38% increase in the number of countries represented and 36% more Gold and Silver medal-winning wines this year, we can truly say that the CSWWC 2015 has been welcomed and embraced by every significant terroir for sparkling wine production!

“This increase in both diversity and quality has doubled the number of Best in Class awards this year, which is a good thing because it draws attention to the high standard of sparkling wine around the world, but it presented us with a problem. It would have resulted in so many Champion trophies by Style that those trophies would have been devalued. We therefore made National trophies our highest and most prestigious awards in 2015, with the single illustrious exception of the Supreme World Champion. Next year it is very likely that we shall see the return of World Champions by Style, but they will be reduced to a select few to ensure that the exclusivity of our top awards is retained.”

The CSWWC is the most respected, comprehensive and rigorous international sparkling wine competition in the world. The complete list of Trophies, Best in Class, Gold and Silver medal winners for 2015 is now available to view on the CSWWC website and will be published with full tasting notes and price categories for each wine in Tom Stevenson’s Champagne & Sparkling Wine Guide 2016 (due to be published in October 2015).

The CSWWC is the first and only terroir-driven competition judged exclusively by renowned fizz experts, all of whom taste each and every wine submitted to guarantee an unprecedented level of consistency and accuracy of judging. Founded by Tom Stevenson in 2014, with the support and expertise of Essi Avellan MW and Dr Tony Jordan, the CSWWC provides both consumers and trade with the definitive annual guide to the best Champagnes and sparkling wines on the planet.