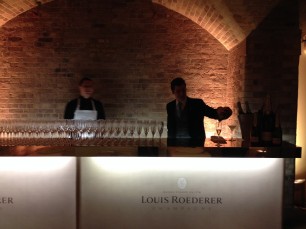 On Thursday 4th December, Aston Martin celebrated its 50 year-long association with James Bond – 007 – two bastions of British culture – and also launched the latest addition to its prestigious DB series – the DB10. As part of the on going association between Aston Martin and Bond, the new model will début in the next James Bond film, Spectre.

The high profile event took place in the London Film Museum, Covent Garden, Central London – a fitting venue given the Bond in Motion exhibition currently on display. The 250 guests included cast from the new film, key members of lifestyle press, opinion formers, as well as friends of Aston Martin. As well as Champagne Louis Roederer served to guests throughout the night from a bespoke Louis Roederer branded bar created for the event, revellers will enjoy canapés and cocktails.

For more information on the new DB10, click here.