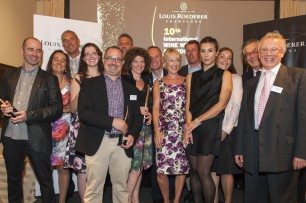 10th September 2014, London – Last night Champagne Louis Roederer and the judges of the 2014 Louis Roederer International Wine Writers’ Awards announced the winners of this year’s competition. The presentation of the tenth annual competition took place at The Royal Academy of Arts on London’s Piccadilly and was attended by wine writers, journalists, members of the wine trade and publishers from around the world, reflecting the ever-increasingly international nature of the competition. The competition’s tenth birthday was marked by a special service of Cristal 2006 in beautiful Jamesse champagne flutes which were designed especially by the head sommelier at the revered Les Crayères restaurant in Reims.