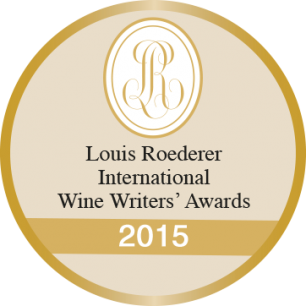 The five judges, among them three previous LRIWWA winners, discussed at length the merits of the entries, and judged on style, content and how well they suited their category. After many difficult decisions with much debate, they agreed on the shortlisted entries for the Louis Roederer International Wine Writers’ Awards 2015.

Charles Metcalfe, Chairman of the judges, commented, “It was a fascinating selection of entries this year, and really good to see some new names doing really well. In some categories, the overall quality was the highest in the history’s competition, and made for a really interesting judging session.

“It’s always a pleasure to be involved and see the scale and scope of wine communication, which is forever evolving.”

Gabriel Stone, editor of The Drinks Business magazine, added: “It was overwhelming to see the volume and international spread of entries on such a thrilling range of subjects: surely a sign that wine writing today is in vigorous health.”

A sentiment that was echoed by 2014 winner Nina Caplan, “It’s heartening to see how many people are trying to broaden the world’s understanding of wine and how much passion and talent some of them bring to that thoroughly worthwhile project.”

“I was thrilled by how much I learnt”, added Jancis Robinson, one of the judges and past winner.

Champagne Louis Roederer and the 2015 judges are delighted to announce this year’s shortlist as follows:

–          The Essence of Wine: Celebrating the Delights of the Palate – Alder Yarrow

PIO CESARE FOOD AND WINE WRITER OF THE YEAR 2015

CHARLES METCALFE – CHAIRMAN OF THE JUDGES
Author of numerous books including the Award-winning Wine and Food Lover’s Guide to Portugal, Wine Writer, Presenter, Co-chairman of the International Wine Challenge, and occasional blogger.
thewinesinger.blog.co.uk
NINA CAPLAN
Nina Caplan is the New Statesman’s wine columnist and a freelance arts, travel and food and drink journalist for publications including the Sunday Telegraph, the Financial Times, Conde Nast Traveller and Square Meal. She has been Guides Editor of The Guardian, Features Editor of Time Out and Editor of Metropolitan, the trilingual Eurostar magazine. Last year she won both the Roederers Wine Columnist of the Year and Fortnum & Mason’s Drink Writer of the Year. She tweets @ninacaplan and blogs, when she remembers, at www.ninacaplan.com.
DR NEIL BECKETT
Dr Neil Beckett began his career as an academic historian. But equally interested in wine, he soon wanted to spend more time down in the cellar than up in the ivory tower. In 2004 he became the first editor of The World of Fine Wine, an award-winning quarterly review on which he works with Hugh Johnson and Andrew Jefford. He was also the general editor of the award-winning Finest Wines series of wine guides, published in association with Aurum and University of California Press. He has won prizes for his writing on wine, is one of the two UK tasters on the Grand Jury Européen, and serves on the advisory board of the Symposium for Professional Wine Writers.
JANCIS ROBINSON OBE MW
Described by Decanter magazine as ‘the most respected wine critic and journalist in the world’, Jancis writes daily for JancisRobinson.com (voted first-ever Wine Website of the Year in the Louis Roederer International Wine Writers Awards 2010), weekly for The Financial Times, and bi-monthly for a column that is syndicated around the world. She is also editor of The Oxford Companion to Wine, co-author with Hugh Johnson ofThe World Atlas of Wine and co-author of Wine Grapes – A complete guide to 1,368 vine varieties, including their origins and flavours, each of these books recognised as a standard reference worldwide.

An award-winning TV presenter, she travels all over the world to conduct wine events and act as a wine judge. In 1984 she was the first person outside the wine trade to pass the rigorous Master of Wine exams and in 2003 she was awarded an OBE by Her Majesty the Queen, on whose cellar she now advises.

She loves and lives for wine in all its glorious diversity, generally favouring balance and subtlety over sheer mass.
GABRIEL STONE
Editor of international trade title The Drinks Business, Gabriel Stone joined the magazine after a degree in Classics, interspersed with work in various UK wine bars and a handful of South African wine estates, as well as being president of the Oxford University Wine Circle. Her work for db has taken her all over the wine and spirits world, and in 2011 she won the Louis Roederer Emerging Wine Writer of the Year award.