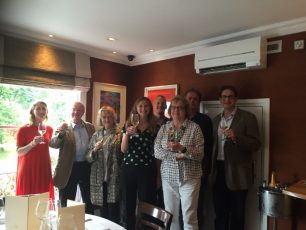 Champagne Louis Roederer and the 2016 judges are delighted to announce this year’s shortlist as follows:
CHAMPAGNE LOUIS ROEDERER ARTISTRY OF WINE AWARD 2016

–          Thirsty Dragon: China’s Lust for Bordeaux and the Threat to the World’s Best Wines –Suzanne Mustacich

The five judges, among them three previous LRIWWA winners, discussed at length the merits of over 200 entries from 19 different countries, judging each on style and content. After many difficult decisions with much debate, they agreed on the shortlisted entries for the Louis Roederer International Wine Writers’ Awards 2016.

Charles Metcalfe, Chairman of the judges, commented, “I’m always amazed at how much good writing about wine there still is. And it doesn’t just come from the UK and USA. Similarly, just when you think every possible wine book has already been written, more excellent new ones appear.

“Feature-writing is a very strong category, and there are some wonderful wine columnists. The emerging writers keep on coming (despite the fact that it’s very hard to make a living writing about wine).”

Tim Atkin MW, added: “Rumours of the death of wine writing have been greatly exaggerated. This was a fantastic crop of columns, features, photographs and online submissions.”

The quality of the categories this year was commented on by judge Sarah Jane Evans MW: “The feature writer category was exceptionally strong; the best were full of imagination and originality. At a time when the market for printed media is shrinking, it is really encouraging to see such strong writing getting published.

“A very lively short-list to choose from for the online writer: very pleased to see recognition for the excellent Spanish wine lover website.”

Despite the heavy workload the judges had to shoulder, all the judges felt that the process afforded them a learning opportunity. Fiona Beckett commented: “In my first year judging the Roederer awards I was really impressed by the scale and breadth of work that wine writing now represents both online and in print. And on a personal level I learnt a lot – it was great to read about subjects I didn’t know about or to see an original take on a well-aired subject.”

Bill Knott succinctly concluded: “The entries this year were as fascinating and wide-ranging as the world of wine itself.”

An invitation-only Awards Ceremony will be taking place to announce the winners at The Royal Academy of Arts, London, on Monday 12th September 2016.