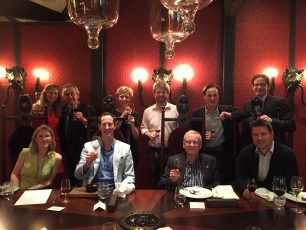 The six judges, including a mix of previous winners, journalists, editors and opera singers, spent hours assessing the entries in depth, carefully considering each addition to the shortlist with animated discussion and commentary.

‘We had even more high-quality entries in this year’s Roederers. Reading them was a really stimulating process. And the Online and Emerging categories continue to highlight new talent,” commented Charles Metcalfe, Chairman of the judges. “A great team of judges made our judging day entertaining and efficient.”

“The world of wine is very lucky to be the subject of such a diverse, passionate, and talented group of writers, there’s astonishing diversity of tone and content: from scholarly research through to pithy one liners,” explained judge Francis Percival.  “At the top level these pieces were more than just writing about wine; these were exercises in serious cultural commentary – cultural commentary from the bottom of a glass, but in a good way,” he added.

On top of the quality and breadth of the topics covered, it was a source of great pleasure to the judges to see such positivity in the submissions: “There was expertise and style in spades this year – but what struck me most was the way the best entrants succeeded in communicating the sheer joy of drinking wine. The people, the places, the stories – all the thing which, along with the liquid itself, make a glass of wine truly memorable,” commented judge Alice Lascelles.

On reflecting on the quality of the entries, Peter Richards MW added: “Do people enjoy drinking wine more than they enjoy reading about it? Maybe. But, on the basis of this year’s LRIWWA, there is some inspired, imaginative and intriguing work going on all around the world by those communicating about and engaging people in this most stimulating of subjects. Bravo to the winners.”

Peter’s congratulations were echoed by Roederer Vice President and Global Communications Director Michel Janneau who came over to London to host the judges’ lunch later that day: “The LRIWWAs are, decidedly, an indefatigable source of pride for us at Roederer, and the 2017 vintage was no exception. With nearly 25% more entries, from an even wider range of countries (over 60% from outside the UK), this year’s judges toiled hard to come up with the shortlist and the winners. All that remains, now, is to   celebrate the efforts of all those involved at the splendid Royal Academy of Art in September.”

An invitation-only Awards Ceremony will be taking place to announce the winners in London, on Tuesday 12th September 2017.

As always, we are hugely grateful to our generous sponsors without whom these internationally recognized Awards would not be possible.

Champagne Louis Roederer and the 2017 judges are delighted to announce this year’s shortlist as follows:

–          Empire of Booze: British History through the Bottom of a Glass – Henry Jeffreys

PIO CESARE FOOD AND WINE WRITER OF THE YEAR 2017

Charles often tastes (and spits out, of course) 100 or more wines per day, all over the world. He is based near Gatwick, with a wife, children, two cats and a varying number of chickens, and still sings in the shower, the local village hall and, occasionally, at wine tastings.
Hamish Anderson
Hamish Anderson, Head Sommelier and Wine Buyer for Tate has curated Tate’s cellars for over ten years and developed a strong reputation in his own right as one of the leading writers and commentators on wine.

Hamish’s first book Vino: Great Wine for Everyday Life has sold over 15,000 copies. The book’s down to earth approach to food and wine has won critical acclaim from amateurs and experts alike. He contributes to a range of publications and his recommendations in the Saturday Telegraph Magazine inspire many thousands of readers every week.
Alice Lascelles
Alice is an award-winning journalist, author and drinks expert. She is a regular contributor to the Financial Times and a contributing editor and drinks columnist for FT How To Spend It magazine. She also writes for The Robb Report and a wide range of titles including The Idler, Vice, Monocle, Noble Rot, Prospect, Restaurant Magazine, The Spirits Business and Imbibe, the award-winning magazine which she co-founded in 2007. She spent two years as the drinks columnist for The Sunday Times and The Times, and in 2016 she was named IWSC Spirits Communicator of the Year. In 2015 she published her debut, Ten Cocktails: The Art of Convivial Drinking (Saltyard), inspired by her professional world travels in pursuit of the mixed drink. She has the rare distinction of being both a Keeper of the Quaich and a Rectifier of the Gin Guild, and is also a regular speaker at festivals, literary events and on the radio. When she’s not writing, she has a second life as a musician which has included touring with the White Stripes and releasing an album. She lives in London with her husband, two sons and cocker spaniel Daisy.

Francis percival
Francis Percival writes on food and wine for The World of Fine Wine. His work won Louis Roederer Best International Wine Columnist in 2013 and Pio Cesare Food & Wine Writer of the Year in 2015. Francis is also a judge in The World of Fine Wine World’s Best Wine List Awards.

Apart from The World of Fine Wine, his work has appeared in Decanter and the Financial Times in the UK and Culture, Saveur, and Gourmet in the US. With Bronwen Percival he is the co-author of a new book on the history, science, and future of cheese and dairy farming, Reinventing the Wheel: Milk, Microbes, and the Fight for Real Cheese, forthcoming from the University of California Press in September 2017.

Besides writing, Francis also teaches classes for Neal’s Yard Dairy and co-founded and hosts the London Gastronomy Seminars, a long-running series of lectures and talks in London dedicated to making the technical side of food and drink fun and accessible.
Peter Richards MW
Peter Richards is a writer, broadcaster and Master of Wine. Through his award-winning work on TV, radio, at events and in print, Peter has an international profile and has been described as, ‘The Superman of vino.’

Perhaps best known as wine presenter on flagship BBC1 show Saturday Kitchen, Peter’s broadcasting work has seen him appear on most major channels. Critical acclaim for Peter’s work – often in conjunction with his wife Susie Barrie, also a Master of Wine & TV broadcaster – includes various well-known awards and accolades, and together they have been described as: ‘Masters of Wine, friendly wine advisors – nothing short of national treasures’. They do a mean Sunday lunch too.

Peter has written two books – The Wines of Chile and Wineries with Style – and contributed to more than a dozen more. His writing credits include The Guardian, FT, Times Online, Decanter, Daily Mail and Food & Drink. He provides top-level consultancy for clients including restaurants, hotels and airlines, and regularly hosts live events from the BBC Good Food Shows to his acclaimed Wine Festival Winchester.

In what time remains he works on his serve-volley game and acts as Susie’s ineffectual sous-chef.
Guy Woodward
Guy Woodward is a lifestyle editor and journalist with over 20 years’ experience in magazines. He made his name in the wine world during a ten-year stint at Decanter magazine, during which the magazine built its World Wine Awards into the biggest wine competition in the world and launched its brand in China. As editor, he championed a consumer-first approach. He left in 2012 to edit upscale lifestyle title Food & Travel, before being approached in 2014 to become associate editor of Harrods Publishing, a position he combined with the same role for Hong Kong-based luxury wine lifestyle magazine Le Pan, which launched in the same year.

Today he continues at Harrods, as deputy editor of all its publications. He is also active as a freelance wine writer, contributing a monthly column for Harpers Wine & Spirit; he has previously written on wine for such titles as TIME magazine, The Guardian, Wallpaper*, Esquire, Shortlist and Christies.com, and has appeared as a wine expert on various broadcast media. Woodward sits on the board of the British Society of Magazine Editors, along with the industry’s highest-profile awards; he served as the organisation’s chair in 2014.