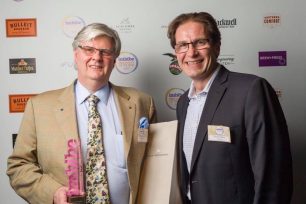 We are delighted to announce that Craig Bancroft, Managing Director of the Michelin Starred Northcote Hotel, has won the Imbibe Hotel Personality of the Year Award for 2017.

Bancroft, an avid Roederer enthusiast, was the obvious choice for the Award. His career has gone from strength to strength, from humble beginnings as a kitchen porter in London’s Kensington Close Hotel, he went on to join the Trusthouse Forte International Management training programme, where he spent six months as chef of Grosvenor House Hotel, followed by another six months in the two Michelin-star Plaza Athénée in Paris.

Craig continued to work at renowned hotels like The Westbury and The Strand Palace, both in London, before landing the position of General Manager at Northcote in 1983, making him the youngest general manager of a hotel at just 23-years-old. Craig has worked tirelessly ever since to transform Northcote into the prestigious property it is today.

It was at Northcote that Craig developed his passion for pairing interesting wines with Head Chef Nigel’s honest, seasonal British cuisine.

Bancorft has always shared a love affair with Champagne Louis Roederer, who proudly sponsored him for this award. Attracted by Roederer’s commitment to quality and excellence and family run ethos, he has chosen to honour the house with a series of themed private dining rooms, as well as showing the majority of Roederer’s wines on his carefully chosen wine list.

Maisons Marques et Domaines are delighted that his avant-garde approach to food and wine matching has been rewarded this year by Imbibe’s judging panel.