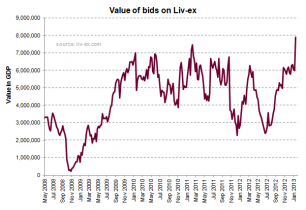 July 2014 – A case of 1998 Petrus sold for a record-breaking £27,000 on Liv-Ex, demonstrating an ongoing demand for rare older Bordeaux vintages, despite the noted downturn in the broader wine market. The price was 4% higher than a similar purchase made earlier in the year, and 9% higher than the price paid in 2012. Looking back even further, the wine sold for three times less eight years ago. “Petrus still seems to be in demand,” explained Stephen Mould, head of Sotheby’s European wine department. The 1998 Petrus was declared the third most expensive from the past 20 years. It was awarded 98 Parker points, which places it in the top six vintages from that era.