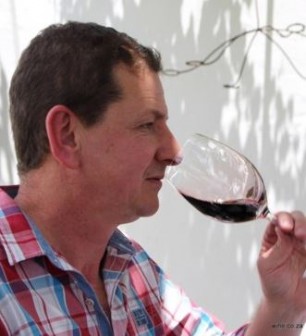 Here is what Chris said:

Well, apart from what has already been said about the Cape in general, I would agree that vintage 2016 has certainly been atypical and, in my career so far, unique.

Our neutron probes and rainfall data have confirmed this is the driest vintage on record, one which followed a very dry winter. This may explain why, even since bud-break, it has been one of the most even vintages. Whole vineyards budded, grew, flowered, went through veraison and are ripening in lock- step unison, which is, in all respects, a positive thing. It has made canopy management, green harvesting and actual harvesting a bit easier. Analysis on vineyard samples, harvested loads and tanks are boringly similar, while all the vines on a given soil type are at exactly the same stage of development. One curious observation is that veraison on Cabernet Franc has been late and slow. Only now are the final berries colouring up and softening.

That said, the dry conditions have brought forward the harvesting dates of Chardonnay, Pinot and Merlot, and while the phenolic element is not so crucial for whites (in that the skins are removed early and play much less of a role in the final character of the wine), for Merlot it may lead to patchy notions of ripeness, it’s still too early to say. The flavours and aromas on Chardonnay are really expressive and beautiful, but it remains to be seen whether the Chardonnay will have the depth of flavour we look for.

For Pinot Noir, we had to pick very early as sunburn and raisining, with resultant loss of freshness were a danger, so I have been purposefully light in my extraction regime, rather seeking freshness and purity at the cost of depth and agebility, I suspect. There is no point trying to make deep, full bodied wines if the phenolics are not up to it, so I have sought to accentuate fruit on the Pinot.

Our younger plantings of Merlot were picked incredibly early. Those with well developed roots seems to have weathered the drought better with slight problems of maturity only on the very young vineyards. That said, I have been cautious with extraction on the Merlot as well, with no post fermentation maceration and shorter, more regular remontage and pigeage on what we have brought in so far. Our better, older, later blocks may be better.

Normally, at Meerlust we use irrigation supplementally, to establish young vines and to give the vineyards a post-harvest irrigation just after picking. This year we have had to irrigate even the mature vines to avoid water stress and vin shut down pre-harvest. This seems to be working, particularly on the later Merlot, the Cab Franc and Cab Sauvignon. The result is that for the first time ever, the little island in the middle of the Meerlust dam is reachable by foot! We have had to stop irrigating now because we have run out of water. This has never happened before. 30mm of soaking rain now would make me re-examine my religious scepticism!

I know of the sad stories from many other areas and growers, but, because of our access to water and the ability to deliver it strategically and  timeously, I see 2016 as an opportunity to make really distinctive, different yet high quality wines, but its demanding much more thought, planning and sampling than a normal Cape vintage. Fortunately, our quantities are normal if not slightly up, we have been able to bring most of the fruit to apparent  maturity but what I’m excited about is that it appears that this year will be different. I foresee the Cabs being the winners this year because of their ability to weather drought and retain acidity. It also seems that the flavours in the Cab are building, growing as time goes by, not being eviscerated by vine stress.

That said, to be brutally honest, I just don’t know exactly how 2016 will turn out. All I’m trying to do now is to get the fruit as close to our definition of ripe as possible, and to give myself the broadest set of blending options later.

Click here to read the rest of the article.