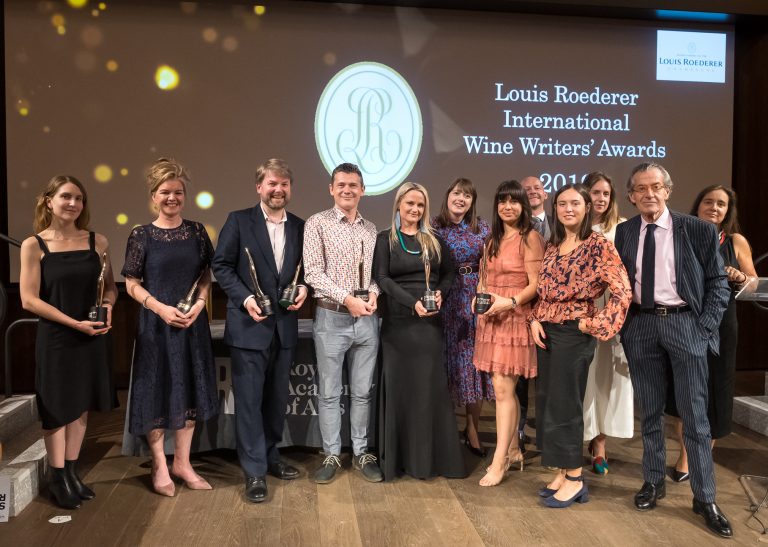 The awards were attended by wine journalists from all over the world and key figures from the UK wine trade and hospitality who were warmly welcomed by Richard Billett, MD of Maisons Marques et Domaines and Charlotte Appleyard, the Director of Development at the Royal Academy.  The awards were held at the RA in continuation of the long standing relationship between Louis Roederer and the RA.

Michel Janneau of Champagne Louis Roederer who was instrumental in introducing the LRIWWA 15 years ago was in London to host the evening and to introduce a new category for the Roederer awards; the Consumer Title Writer of the Year designed to promote communication and engagement beyond the wine proficient audience. Alongside Charles Metcalfe, the chairman of the judges, they extended their thanks to the judges for their hard work and diligence, and of course wished those journalists shortlisted the very best of luck. The entries were praised variously by judges as “well researched”, “beautifully written”, “absolutely brilliant” and “thought provoking”. As Charles noted “each year I think the entries must be as good as it gets, but each year it gets better”.

Maisons Marques et Domaines are grateful to our generous sponsors without whom these Awards would not be possible: Champagne Louis Roederer, Domaine Faiveley, Domaines Ott*, Ramos Pinto, Pio Cesare, and Marchesi Mazzei whose wines were also available to taste on the night. We are also delighted to welcome Montblanc as a new sponsor to the competition.

It is with great delight that Champagne Louis Roederer and the 2019 judges can reveal this year’s shortlist and winners along with a link to one of their winning entries as follows:

Charles’ past careers as a tour guide, security guard, freelance cook, investment analyst and opera singer were the perfect preparation for co-founding Britain’s second consumer wine magazine (Wine International) and the International Wine Challenge. He served a 12-year term as drinks expert on Richard & Judy’s ‘This Morning’ and has presented wine and food on many TV shows. He is also a wine consultant to the Corporation of London. His book, ‘The Wine & Food Lover’s Guide to Portugal’, won the 2008 Louis Roederer International Wine Writer’s Book Award, and he is Honorary President of the Association of Wine Educators.

German-born but London-based, Anne Krebiehl MW is a freelance wine writer and lecturer. She is the contributing editor for Austria, Alsace and England for the US Wine Enthusiast and also writes for trade and consumer wine publications such as The World of Fine Wine, Decanter, The Buyer, Falstaff, Vinum, etc.. She lectures, consults and judges at international wine competitions and is a panel chair at the International Wine Challenge. She completed her WSET Diploma in 2010 and was admitted to the Institute of Masters of Wine in September 2014. Anne has helped to harvest and make wine in New Zealand, Germany and Italy.

Emma won the Emerging Wine Writer category in the 2014 Louis Roederer Awards for her articles published on the Wine Monkeys blog. After winning the Vintners’ Cup and Vintners’ Scholarship for the top WSET Diploma graduate in 2011 she embarked on the Master of Wine course, becoming an MW in 2015. A  WSET-certified educator, her day job is running Wine Australia’s events and education programme in the UK and she also judges at several international wine competitions. She is excited to judge the 2019 Roederer Awards and is looking forward to reading this year’s entries.

Victoria Daskal is managing editor at The World of Fine Wine magazine and a stage two student at the Institute of Masters of Wine.

Born in Moldova, she grew up in Boston, MA and upon completing the OIV MSc in International Wine Management Victoria came to London, UK to intern and write for Jancis Robinson MW. She has worked in sales for Laithwaites Wine and Slurp, managed AWC Wine Academy and has been freelance writing for over a decade. After completing the WSET Diploma with Merit, she became a WSET Certified Course Tutor and has enjoyed educating individuals, trade, and corporate groups. She is a judge at International Wine and Spirits Competition.

Victoria has over twenty years’ picture editing experience, including ten years as the Picture Editor of Decanter.  She is a freelance picture researcher and runs a design business ‘Cluck Cluck’.  Victoria has been in charge of the Artistry category for the LRIWWA since 2011

An award-winning wine writer, presenter, wine judge and food writer, Joanna is also co-founder of The wine Gang.  She is the editor for Waitrose and Partners Drinks Magazine, and was the Sunday Times wine critic for 22 years.  Joanna has written numerous books and has been editor of both Wine and Wine & Spirit Magazines.

John was the Content Director at Decanter for 5 years but has recently gone freelance.  Prior to that he was a freelance journalist and contributing editor to Decanter and The Financial Times How To Spend It magazine.  He has written for numerous titles and has won several wine writing accolades including three Louis Roederer Feature Writer of the Year Awards.
For further information about the competition, or the awards presentation, please contact:
Alex Tilling Champagne Louis Roederer Brand Manager / Maisons Marques et Domaines Ltd
T : 020 8812 3380 E : alexandra.tilling@mmdltd.co.uk
www.theroedererawards.com      www.louis-roederer.com