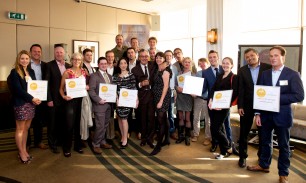 The winners of the Champagne Louis Roeder & Imbibe Wine List of the Year were announced last night at Galvin at Windows in the London Hilton on Park Lane.
The 5th annual competition brought together the great and the good of the UK on-trade from across the country, celebrating wine list excellence in all its forms.
The competition is designed in such a way as to ensure all restaurants and bars – large and small alike – will be judged according to their size and outfit. The competition rewards venues that demonstrate personality, style, great bins and those that encourage customers to learn more about wine.
The winners will be featured in extensive coverage in Imbibe magazine and online.

SOMMELIER’S AWARD
The Sommelier’s Award is designed to recognise excellence of sourcing, rather than imagination of presentation. Nearly always made up of several hundred bins, these are lists where the wine is everything.

HALL OF FAME
The lists in these establishments are all examples of continued excellence that have picked up awards in this competition over two or more years. To recognise this – and also to prevent their consistent brilliance from ‘blocking’ other potential winners – they have been placed in the Hall of Fame. Many congratulations to these proven star performers.

The lists are judge by an experienced team of sommeliers, consultants and wine buyers from all areas of the trade. Lists are scored on accuracy, aesthetic appeal/creativity, clarity/ease of navigation, quality of wine, relevance to market and value for money. All entrants will receive feedback and a consultation with one of the judges or Imbibe editor Chris Losh at Imbibe Live.