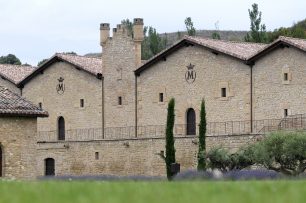 According to Wines from Spain’s recently published Harvest Report, the 2016 vintage in Rioja was very positive, resulting in higher volumes and quality than the previous year.

2016 experienced a long harvest, which lasted over two months. An extremely hot, dry summer was followed by unusually warm and fine weather over the harvest period, allowing grapes to achieve perfect ripeness according to variety and vineyard site.

Long anticipated rains, which arrived in mid-September, were the deciding factor for quality for many in the region, and were particularly well timed in the cooler, more Atlantic areas.

However, for Marqués de Murrieta, as for many growers in the region, the 2016 harvest required a great deal of patience. Harvest of white grapes commenced on 28th September, while it took until the 3rd October for the red grapes to achieve perfect ripeness. The delay was due to the high summer temperatures and the lack of rainfall.

Temperatures began to fall in mid-late September and early October, causing an increase in sugar content and an assimilation of phenolic compounds and aromas.

For Murrieta, the quality of the vintage is undeniable. 2016 is a year of powerful, intense, long-lasting wines which will evolve beautifully during their period of oak ageing.

Contact Christine Allen to find out more about the 2016 vintage.