Dalmau is one of Tim Atkin MW’s Top Wines from his Favourite Producers! 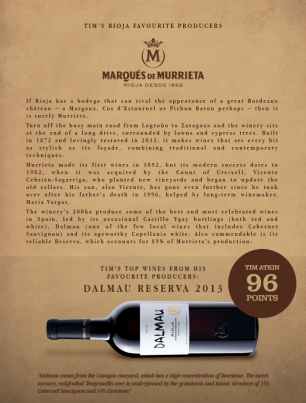 Tim Atkin MW has picked Dalmau 2013, a blend of Tempranillo and old vine Cabernet Sauvignon, as his top wine from one of his favourite producers, Marqués de Murrieta.

“If Rioja has a bodega that can rival the appearance of a great Bordeaux chateau – a Margaux, Clos d’Estournel or Pichon Baron perhaps – then it is surely Murrieta.

…The winery sits at the end of a long drive, surrounded by lawns and cypress trees. Built in 1987 and lovingly restored in 2013, it makes wines that are every bit as stylish as its facade, combining traditional and contemporary techniques.

Murrieta made its first wines in 1852, but its modern success dates to 1982, when it was acquired by the Count of Creixell, Vicente Cebrian-Sagarriga, who planted new vineyards and began to update the old cellars. His son, Vicente, has gone even further since he took over…helped by long-term winemaker, Maria Vargas.

The winery’s 300ha produce some of the bet and most celebrated wines in Spain, led by its occasional Castillo Ygay bottlings…Dalmau (one of the few local wines that includes Cabernet Sauvignon) and its ageworthy Capellania white. Also commendable is its reliable Reserva, which accounts for 85% of Murrieta’s production.”

Tim scored his favourite, Dalmau, 96 points and described it as “sweet, savoury [and] red-fruited”.